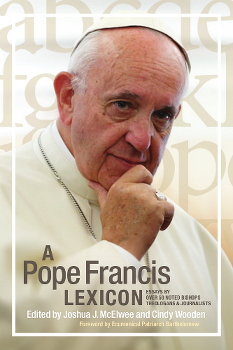 A Pope Francis Lexicon is a collection of over fifty essays, co-edited by myself and Cindy Wooden, that brings together an impressive set of insightful contributors from around the globe. Each person writes on a specific word that has become important in the ministry of Pope Francis.

Together, they reveal what Francis's use of these words says about him, his ministry and priorities, and their significance to the church, the world, and the lives of individual Christians. The entire collection is introduced by a foreword by Ecumenical Patriarch Bartholomew, the spiritual leader of Orthodox Christians worldwide, and a preface by one of Francis's closest advisors, Cardinal Seán O'Malley.

For more information, or to order: visit here.

There is also a British version of the volume, Key Words of Pope Francis, published in the UK by Bloomsbury; a French version, Lexique du Pape François, published in France by Cerf; and an Italian version, Francescamente parlando, published by the Vatican's Libreria Editrice Vaticana.